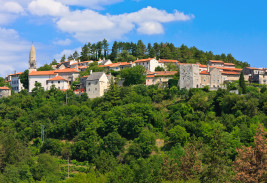 The Karst is a cross-border geographical region in south-western Slovenia, which stretches as far as the Gulf of Trieste and the boundaries of the Friuli Venezia-Giulia region. The area is famous for its characteristic limestone terrain and its traditional stone-built houses. A wind called the Bora sweeps through the region, drying the ham and giving a distinctive flavour to the local Terrano and Malvasia wines.

This is the name given to a geographical area in western Slovenia – just across the border with Italy – which stretches as far as the Soča River. Aside from its many fascinating little villages, this area is one of the most famous wine-producing places in Slovenia and Italy. The grape types typical of this area are Merlot, Cabernet Sauvignon, Rebula, Tokaj, Pinot gris and Pinot noir. The area is also well known for its cherries, peaches, apricots and olive oil.

A town with a fascinating medieval centre which grew up around the main square, which is known as Piazza della Vittoria. The town centre built up at the foot of a hill, on top of which there is an ancient castle. Other places worth visiting in this town are the cathedral, the church dedicated to Saint Ignatius of Loyola, and many Austro-Hungarian buildings from the 19th century, in particular the Atems and Coronini Palaces.

Here you can see the ruins of an ancient stronghold and visit a 14th-century castle which is open to the public. 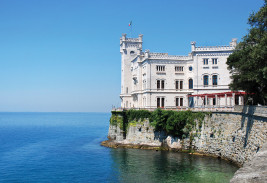 A 19th-century castle which has been transformed into a museum. Here you can visit the private chambers of Archduke Maximilian I of Mexico and the luxurious guest rooms. The castle is surrounded by a 54-acre park full of rare exotic plants.

A rare example of a classic intermittent Karstic lake in Europe. Lake Cerknica is the only one other such lake.

A fascinating town with Roman ruins, a very well-preserved amphitheatre, a castle, a basilica, stunning Austro-Hungarian buildings from the 19th century, and an incredible old town.